Investigating the Impact of Latin American Dance on African-American Jazz

Button Text
African-American jazz started in the United States in the 20th century and since has had influence from Latin American rhythms. Similarities and combinations of their style have arisen from their musical contact. Both styles incorporate syncopation in their harmonies and melodies. The habanera rhythm, a style of Cuban syncopation, has been used by many jazz and Latin musicians. The habanera rhythm can be found in a variety of tango and ragtime music. Additionally, the jazz of New York City had especially been impacted by Cubans. The result was a new style of Latin jazz called Afro-Cuban jazz that incorporated clave rhythm, dance, and improvisation. This coalition in culture united the music of North America and Latin countries. 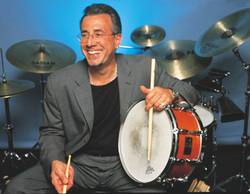 Bobby Sanabria
“Jazz’s primary harmonic and melodic vocabulary is rooted first and foremost in the blues, which undeniably comes from the African-American experience,” Bobby Sanabria, a bandleader, composer, drummer/percussionist and musical educator, says. “But jazz developed in New Orleans from African-American and Caribbean influences, which means Latinos were present at its birth, and continue to be involved in its evolution.”

Sanabria also sees the importance of the 3-2 pattern. “It’s what connects us back to our rhythmic roots; to West Africa,” he says. “I would say it is a common unifier in terms of the rhythmic structures, cultures and music of Cuba, Puerto Rico and the Dominican Republic. To a lesser extent, it’s also at the root of second-line patterns in New Orleans. Because of this, the rhythmic principle of the clave is also at the root of funk, rock, R&B and the horn lines of the big-band tradition of swing back in the 1930s. The problem is that most musicians don’t know that. When you don’t know your history, it’s very easy to keep people, especially musicians, segregated from each other.”